Back to the Mindlab for Robotics

On Wednesday we have another session at the Mindlab and this time we were led by Josh. It was another fabulous session. When we walked into the room there were kits for every person sitting on the desks. Creating the robots was a lesson in following instructions and they took about 40 mins to build. It helped if you liked playing with lego although the pieces were more pliable than lego.

After we had created our robots we plugged them into the computer and programmed in much the same way as we did last time. We added sensors that responded to light and dark and programmed using the senses as well.

Thanks Josh and Mindlab, it was another great session. 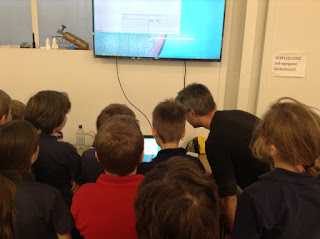 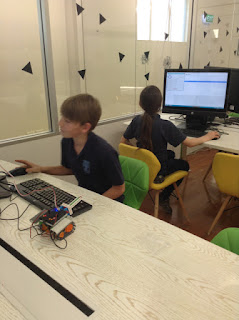 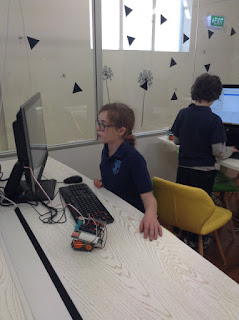 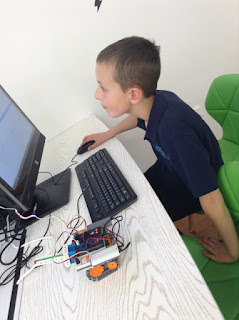 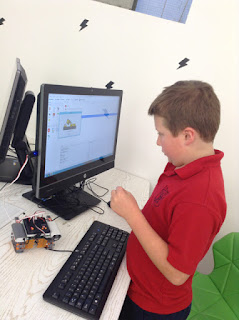 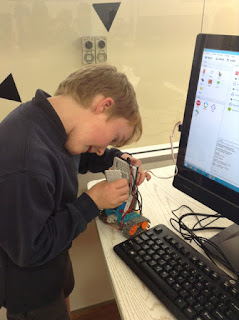 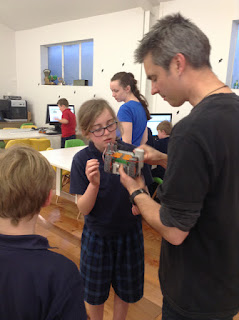 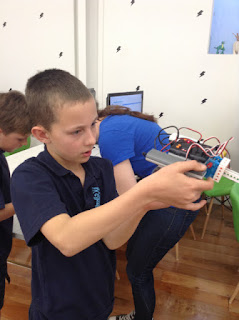 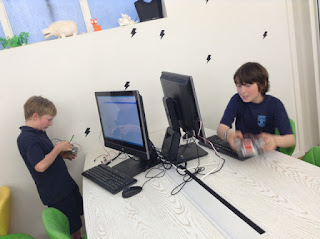 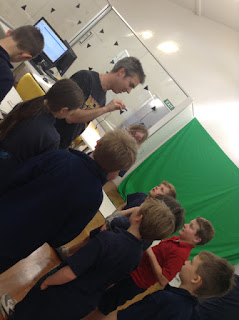 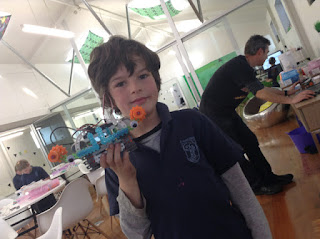 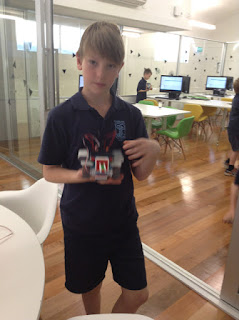 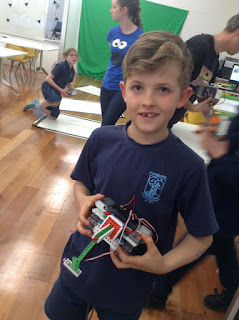 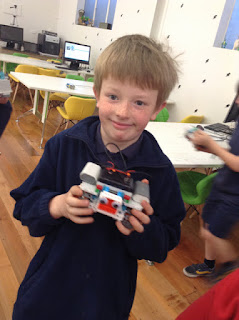 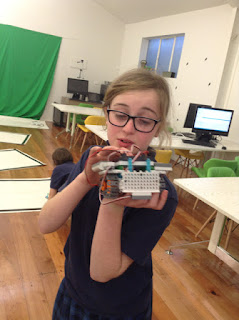 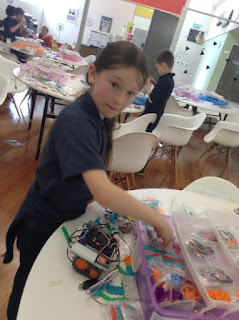 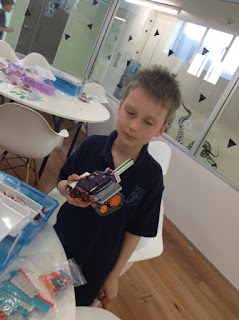 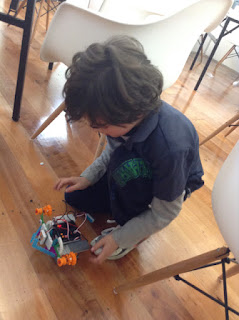 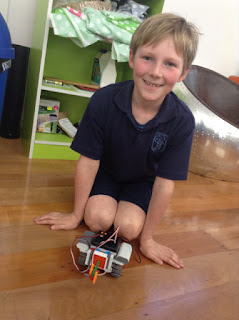 Posted by ClaireHowison at 4:39 PM No comments:

Year 3 and 4 Writing with Greg O'Connell

How can you mix writing about the ocean with writing about an ordinary day? That was the challenge posed by Greg from the School of Young Writers this week.

Check out the results.

the day of the week is ocean

Ocean Mania
The day of the week
is Oceanly Boring.
I go to Socean School.
Now my drama is taken over
by hammerheads,
who drive me clownfish.
My friend can't stop
waving her graceful tail
in my face, as usual.
I am eelly electrified
by the way this day
was fishy formed.

The Super Sea
I wake up and push my green seaweed blanket
off myself. I open the blue whale cupboard
and get the bread. I go to school and have
jellyfish play time. I re-clip the pale brown
coral in my hair. We start reading
at seahorse o'clock. We go outside and eat
our grey seal. Me and my whale go on my
yellow submarine to collect seashells.
And that's the end of my Ocean Monday.
Charlotte, Year 3

The Day of the Week is Salt Sea
I go to Nana's coral
to eat my fish sushi
and jellyfish crackers.
We go to pick up Tom
in our submarine, and take him
back to the fishmouth.
When dad gets home
he makes our electric eel.
For pudding we have clownfish
and it tastes really funny.
After it is bath time.
We take off our jellyfish
and hop into the sea.
Erin, Year 3

The Clammiest Day Ever
I wake up in the morning and slip off the wrong side of the seaweed. Needing some refreshment, I reach into the Antarctic and pull out a jug of jellyfish. I sit down on the anemone to enjoy the coral - with extra seaweed, just how I like it. Then the penguin wakes up. Just in time, I plug the sea foam into my ears. I brush the octopus through my hair, pulling the tentacles away from my mouth. I hate the taste of octopus. I wrap the eel around my neck. It electrifies me. The pufferfish on the door slams. "Yay!" Master Clownfish is here to pick me up. I wonder if he remembered to bring in the skates - we don't want the neighbours to dump their algae in them. I'm feeling so clam. At the start of school, Mr Shrimp asks us to hand in our seawork. I've forgotten to do mine. "Um..." I say, "My catfish ate it."
"Really, did you wrap it in tuna?"
"No. Although it might smell of it because..."
"ENOUGH! You can do your seawork in front of the class."
"But sir, I forgot my krill so I can't write."
"You can borrow mine."
"But it's covered in algae, sir. I hate algae."
Isobel, Year 4

Ocean, Ocean, Ocean, Boring Ocean
It's a sunny fish
so I put on my seaglasses,
and a white T-shirt and sharks.
I go to school on my first day
feeling jellyfish.
Finally, the end of the fish comes
and I go back to the Atlantic.
I come in and dad is watching
clam news on TV.
I put my bag away
and go to the reef to play football.
I score three crabs and have dinner.
James, Year 4

Just Another Wavy Day
I roll out of my sleeping island
and plug my seaweed into the electric eel.
Then I swim to the fish school
to help the tuna with their swimming
so that they can survive the hammerheads.
Five hours later, I go with the mermaids
to collect pretty seashells and valuable
things from shipwrecks. Then I go back
to a cave on my sleeping island where
I keep all my valuables.
Jeshaiah, Year 4

Wavy Day
I go to starfish ballet
to stretch out my body.
In the morning I have
a gobble of sharky breakfast.
It is my favourite breakfast
made by my octopus dad.
It has a sprinkle of
seabeans and fishetti.
Lily, Year 3

A Crab Day
I wake up and pull my skate
off my bed. I go downstairs
to have some coral.
Mr Hammerhead gave us
some shelling work.
Waves went by.
The tide was coming in.
Finally, the eel rings
and I sea everyone flush out
the door. I played octopus
with some penguins.
Soon it was time to swim
so I zoomed off in my submarine.
Lucy, Year 4

Drowning in the Day
I felt the soft patter of a catfish.
Then I relaxed in my seabed.
I put my basketball shrimp on,
along with my sports krill.
I nagged my brother jellyfish
until a sting shot down my veins.
Jellyfish or not, my brother would sting me.
As I played guitar, my flippers got numb.
When my teacher waddled away, I quacked.
No response.
Noah, Year 4

Sea Spectacular
I do my hair in a seaweed scrunchy
to keep it out of my shell.
I eat my coral with a glass of sea
to freshen up.
I go to Sea Albans School
to see my teacher, Miss Krill.
Olivia D, Year 3

The Kriziest Day Ever
Today is Ocean.
I go to Socean School
with my friend Rocean.
I meet Mrs Nocean
holding a big potion.
Mocean is after morning brocean.
I go to the door. It's flooding.
Just as usual I go in, and grab
a fish pad and angry eels.
Rory, Year 3
Posted by ClaireHowison at 3:46 PM No comments: