Please email me with other links as we explore our future scene.
claire.howison@stalbans.school.nz

Remember in FPS we need to think flexibly to cover as many categories as possible. Here is a list of the categories that we cover. 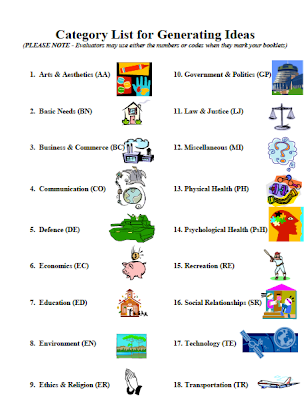 Earthquakes, tsunamis, tornadoes, hurricanes, floods, wildfires, and other natural disasters are big news when they occur. Front page news and internet feeds bring us the details of staggering statistics and images of loss of life and property. Recovery work such as rebuilding homes, infrastructure, and businesses go on even when the news moves on to the next big story. The human factor such as recovery from emotional, mental, and physical stress is a painful and difficult journey for survivors of natural disasters, often taking many years after the disaster strikes. A disaster recovery plan (DRP) often proves inadequate especially since it is often developed only after a disaster. Government agencies, insurance companies, charitable organisations, celebrities, and individual volunteers respond with immediate help, but long-term support can be difficult to sustain. How can relief efforts be best utilised, coordinated, and sustained to assist survivors? How can the people, communities, and countries that are affected by a disaster begin to recover from their losses and cope with their changed lives? How will the impact on psychological and physical health be managed?

Sites to look at

Will Indonesia be ready for the next tsunami?

Are we ready for the next big volcanic eruption?

Preparing for the next typhoon in the Phillipines

States, donors must do more to tackle risingdisaster risk

Thousands pray at Indonesian mosque that survived, 10 years after tsunami.

Language is the soul of a culture. The survival of a culture may depend on the language used for rituals and to describe cultural ideas, beliefs, and understandings. What is the impact on culture when its language disappears? By some estimates, of the six thousand languages left on Earth, 90% are expected to disappear or be endangered before the end of this century. In New Zealand, government and community initiatives are trying to revive the language of indigenous people, but even so it is in a precarious state. Many indigenous peoples around the globe don’t have support to prevent their language from disappearing. Will anyone be able to read the rich literature embodied in the disappearing languages in the years to come? What oral traditions will be lost? What responsibilities, if any, do governments, institutions, and communities have towards preserving endangered languages?

Why we need to save languages, this is a great reading to start with.

This a parents perspective of the challenges involved in raising a child to speak Maori in NZ.

The Language Barrier is about the fall - an article about technology that might transcend              language.

The birth of a new language in Australia

Smart apps being used to save languages

Technology to the rescue

Why we should save languages

What we can learn from others efforts

Reindeer herders, an app and a fight to save a language

Farmers, pet and animal owners, and scientific researchers have many different ways of treating animals in their care. Fewer than 30% of countries have animal welfare laws, and existing laws are not always enforced. Researchers assert that it is important to be able to use animals in research to test drugs and new medical procedures that can help both people and animals. Sometimes endangered animals are kept in captivity at a high cost in order to protect their limited populations. Animal shelters are often filled with feral animals or those that have been abandoned by their owners. Wild animals in many parts of the world come into conflict with human activity.
In the future, how might research impact human understanding and treatment of animals? Are zoos useful educational tools or unethical exhibitions? Are certain animals entitled to more rights than others based on cultural or intelligence differences? How can humans be better stewards in the treatment of animals? Who decides the appropriate treatment of animals and their role in society?

Why Primates Shouldn't be Pets

Animal Experimentation - should this be allowed?
Testing on Animals by Hospitals

More testing - is this okay?
Wildlife Becoming a Casualty of War - what do you think?
Animal Rights - should they have the same rights as people? Why? Why not?
Treatment of Animals in Zoos - who should decide on the death of an animal?
Lions Killed in Zoo
Seaworld and other 'Zoos' - what do you think?
What is the Effect of Living in Captivity?
Report on treatment of animals at Seaworld
A Zoo from the other side
The Five Worst Zoos
Bears Deaths linked to Chocolate
Treatment of Stray Pets in China
The Cost of a Pure bred Dog
Treatment of Animals - Role of the SPCA
Fox Hunting - should it be allowed?
The Circus and Animals - what is your opinion?
Remember Cecil? Game hunting article

Tricky Read - Guideline for the care of animals

People for the Ethical Treatment of Animals PETA